This comprehensive encyclopedia of small arms is both an authoritative reference work and stunning visual directory. The chronological survey of arms development looks at the origins of firearms, beginning with gunpowder and developing through handguns, matchlocks, wheelocks and flintlocks. The 20th century era and beyond is dominated by the manufacture of arms for major worldwide conflicts, and the development of submachine guns in the period between the World Wars. Modern arms are explained in detail, covering the materials, mechanics and technology including the rise of Super Magnum revolvers and pistols and the personal defense weapon. Relevant issues are also looked at such as gun safety, responsible handling, legal ownership and the valuation of modern and historical guns.
The main part of the book is made up of the directory – the most comprehensive visual reference of its kind published for the general reader, this presents an unparalleled photographic guide to the most significant small guns. Grouped according to country of origin, the entries focus on the salient features of each gun and the military, political and technological context in which the gun was developed. This often includes details of the design, manufacturer and the conflict or operation in which the gun was used. Special information boxes accompany each entry with specification details such as caliber, magazine capacity, barrel length and unloaded weight. A comprehensive list of manufacturers and a glossary is also included.
Written by leading experts in the field, this superbly illustrated encyclopedia will be essential reading for anyone interested in gun manufacture and conflicts of war.
Anthony North has worked for many years at the Victoria & Albert Museum, giving him a wide knowledge of public and private collections of firearms and has unique access to many historic and lavishly decorated weapons.
Charles Stronge is an experienced editor and writer who has worked for several years in leading London publishers, primarily in the fields of politics, international affairs and military history.
William Fowler has worked in journalism and publishing since 1972, specializing in military history, current affairs and defence technology. He is the author of over 30 books covering military technology and conflicts from the 19th century to the Second Gulf War. 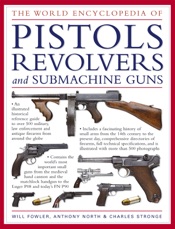