A Charming Christmas Story Told by Ursel Scheffler and Illustrated by Jutta Timm is now also Available as an read aloud eBook Translated and Spoken by Donald Arthur!

Santa Claus had never actually given much thought to his appearance, but one day when he comes upon a newspaper article newspaper claiming he is too fat and oldfashioned, and his gifts are no longer in tune with the times, he decides to restyle himself. He starts jogging, loses weight and launches into the next Christmas season with a completely changed appearance. But, much to his amazement, he meets with a totally unexpected reception.

A humorous Christmas story by Ursel Scheffler, magnificently illustrated with an elaborate love for detail by Jutta Timm.

Translated and spoken by Donald Arthur who has been featured in European versions of such well-known cartoon productions as The Simpsons, The Muppet Show, Fraggle Rock, Count Duckula, Balloon Tunes and South Park. 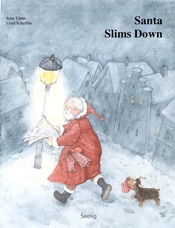