The first book in the spellbinding, epic adventure series from ‘the Godmother of Fantasy’, Diana Wynne Jones. Now back in print!

For centuries, Dalemark has been a land divided by the warring earldoms of the North and South. Now, with the help of the mysterious gods of Dalemark, four extraordinary young people must join forces to reunify their beloved home.

When twelve-year-old Moril’s father is murdered by soldiers, Moril inherits his ancient cwidder – a musical instrument with a mysterious past. As Moril and his siblings embark on a dangerous journey to escape the evil forces around them, he gradually learns how to channel the cwidder’s strange and powerful magic. But is it enough to protect those he loves from the looming threat of war?

“…Her hallmarks include laugh-aloud humour, plenty of magic and imaginative array of alternate worlds. Yet, at the same time, a great seriousness is present in all of her novels, a sense of urgency that links Jones’s most outrageous plots to her readers’ hopes and fears…”
Publishers Weekly

“The best writer of magic there is”
Neil Gaiman

“Wit and humor glint from the pages"
The Horn Book

Diana Wynne Jones (1934–2011) spent her childhood in Essex and began writing fantasy novels for children in the 1970s. With her unique combination of magic, humour and imagination, she enthralled generations of children and adults with her work. She won the Guardian Award in 1977 with Charmed Life, was runner-up for the Children's Book Award in 1981 and was twice runner-up for the Carnegie Medal. 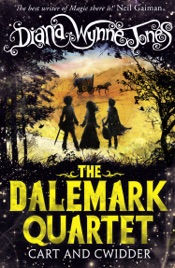